The store will not work correctly in the case when cookies are disabled.

The best for
the brightest.
Buy Now 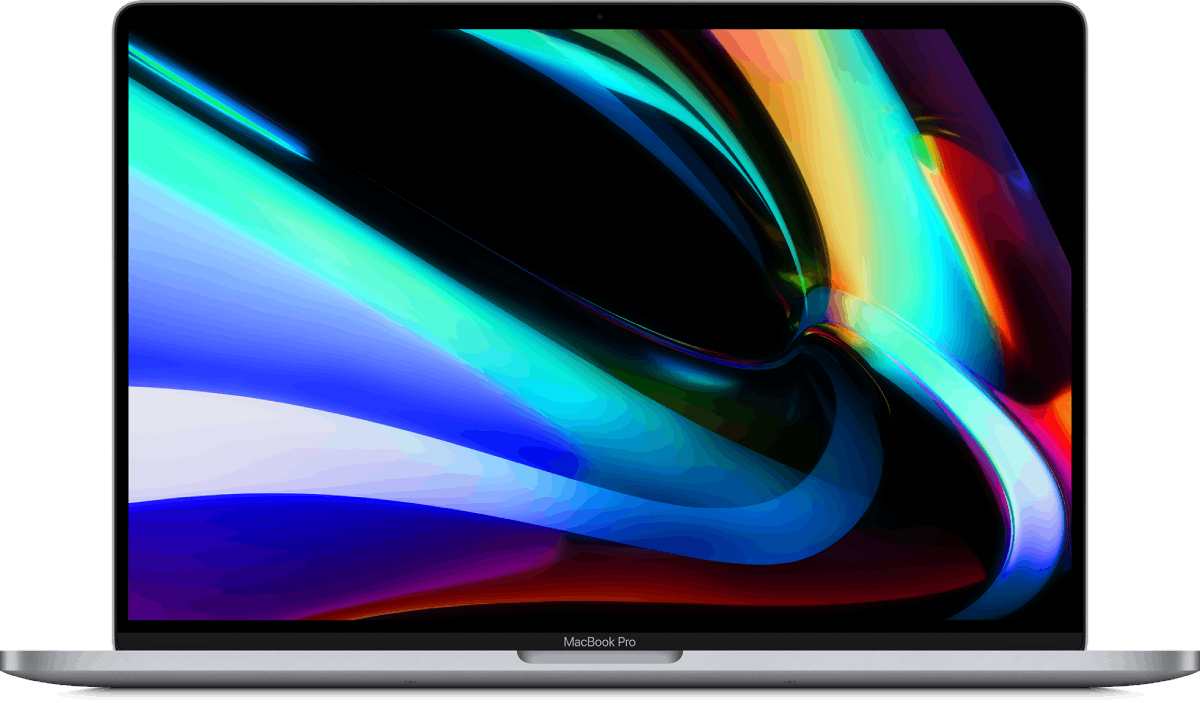 16-inch Retina display1
for an immersive viewing experience.
Up to 8-core processor
to power through intensive workloads.
Up to 8TB SSD storage2
— the highest capacity in any notebook.
Up to 64GB of memory
for large files and smooth multitasking.
AMD Radeon Pro 5000M series graphics
for fast rendering and seamless playback.
Six-speaker sound system and studio-quality mics
for dramatic sound and super-clean recordings.
Designed for those who defy limits and change the world,
the new MacBook Pro is by far the most powerful notebook Apple has ever made. With an immersive 16-inch Retina display, super-fast processors, next-generation graphics, the largest battery capacity ever in a MacBook Pro, a new Magic Keyboard and massive storage, it’s the ultimate pro notebook for the ultimate user.
Retina Display
A big, beautiful workspace.
For big, beautiful work. 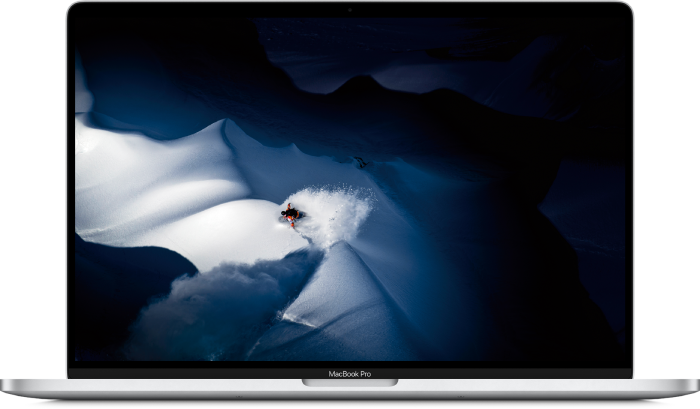 The new MacBook Pro features a stunning 16-inch Retina display — the largest Retina display ever in a Mac notebook. It produces 500 nits of brightness for spectacular highlights and bright whites, while delivering deep blacks thanks to the precise photo alignment of liquid crystal molecules. The P3 wide colour gamut offers brilliant, true-to-life images and video. So no matter where you are, you’ll see your work in the best possible light.
P3
wide colour gamut
500 nits
of brightness
Processor and Memory
Working at the speed of thought. 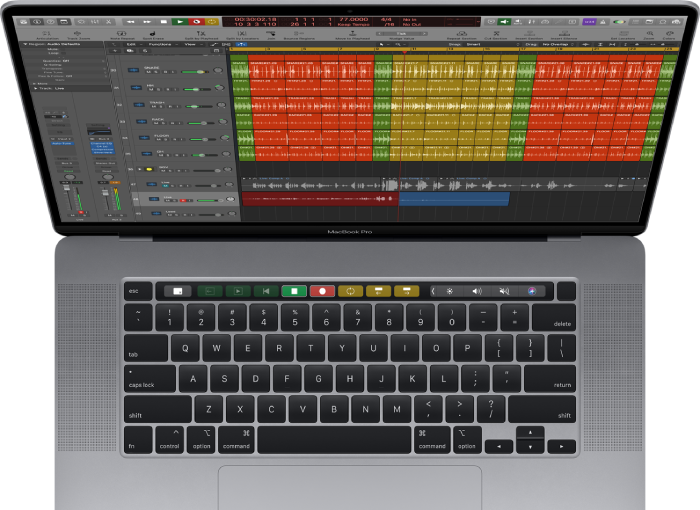 The 16-inch MacBook Pro brings a whole new class of performance to the notebook. Thanks to a more advanced thermal design, the Intel Core i9 processor with up to 8 cores and 16 threads of processing power sustains higher performance for longer periods of time — and delivers up to 2.1 times the performance of a quad-core MacBook Pro.3 So whether you're layering dozens of tracks and effects, rendering 3D models, or compiling and testing code, you'll be doing it in no time flat. 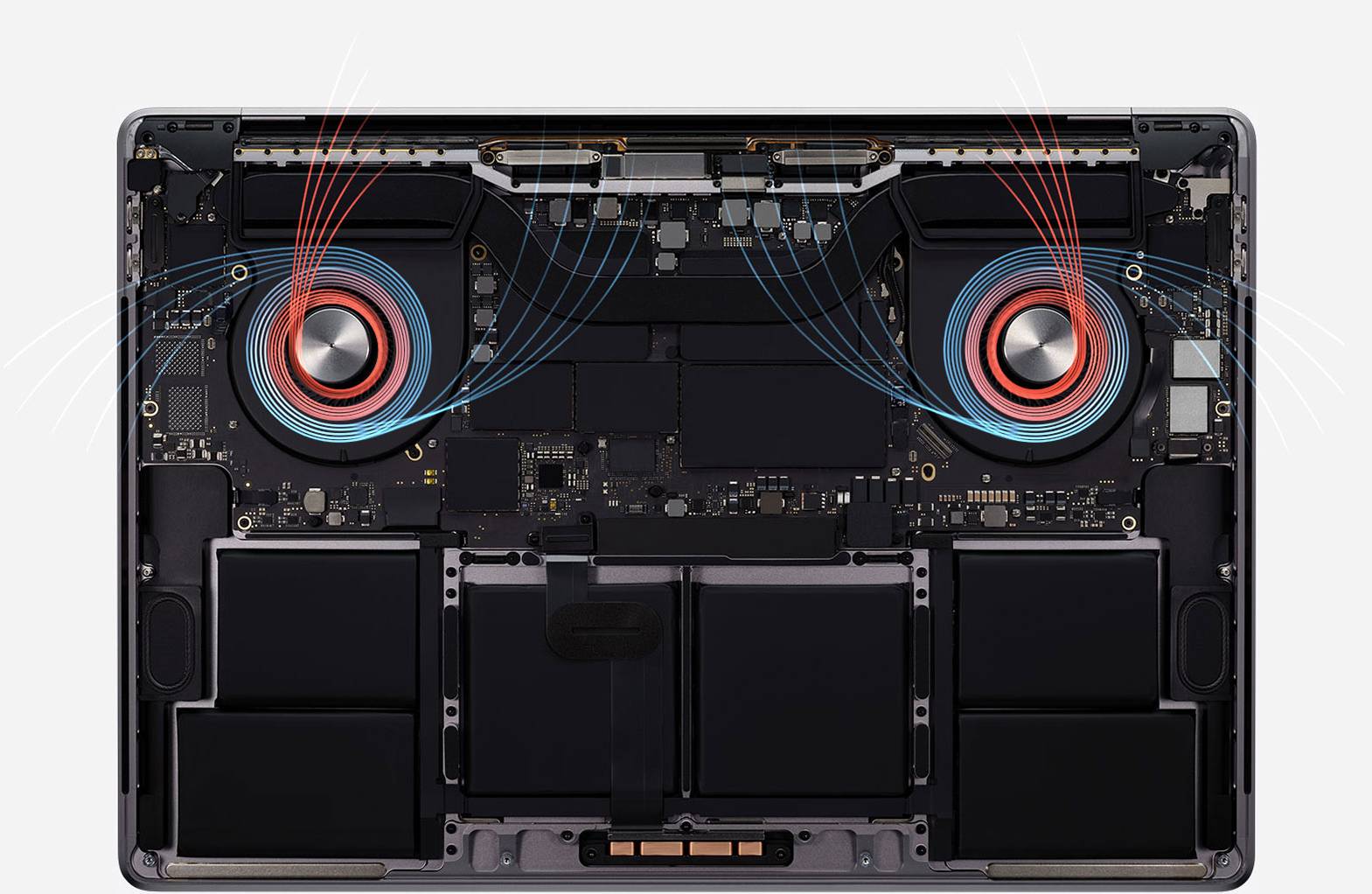 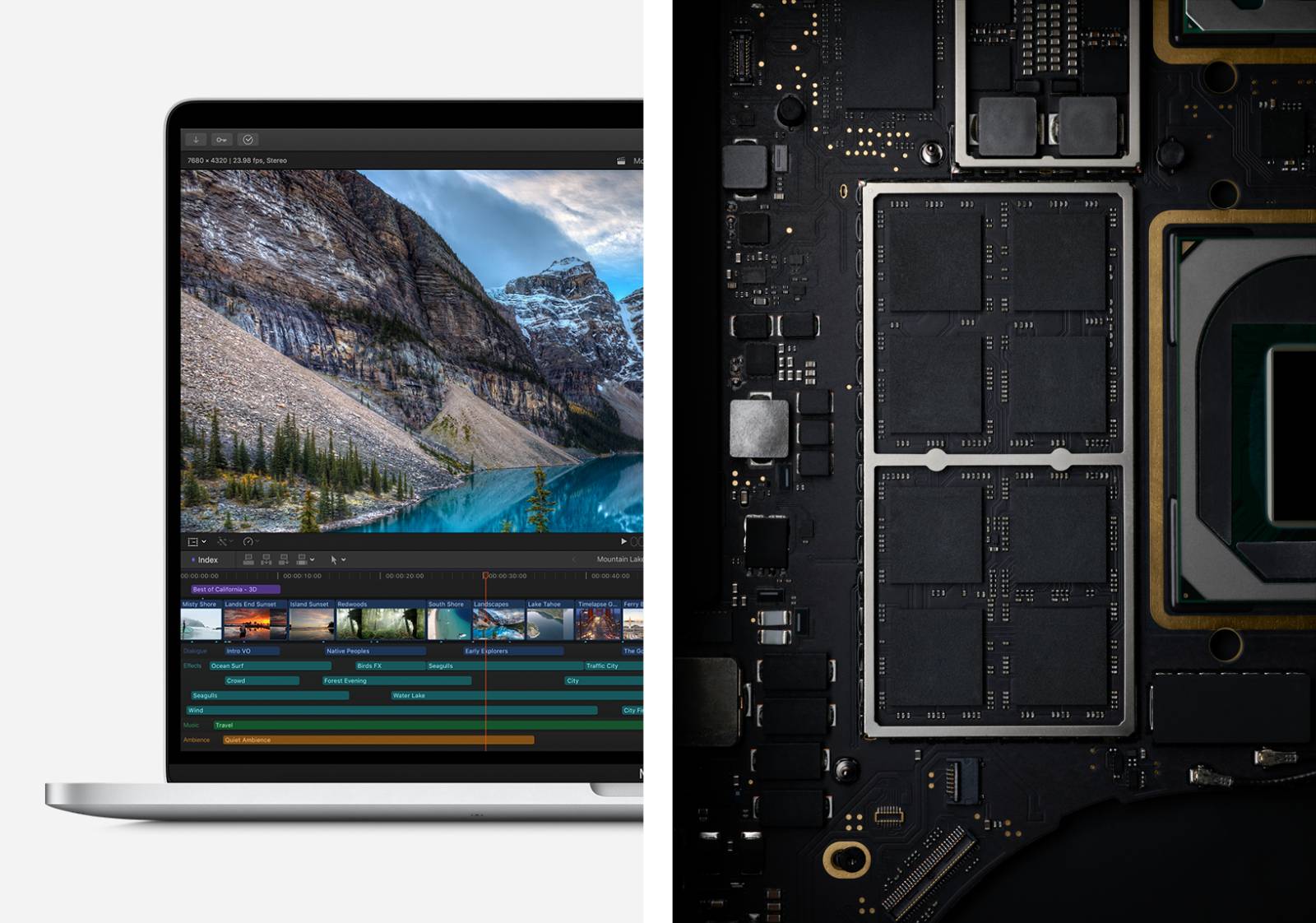 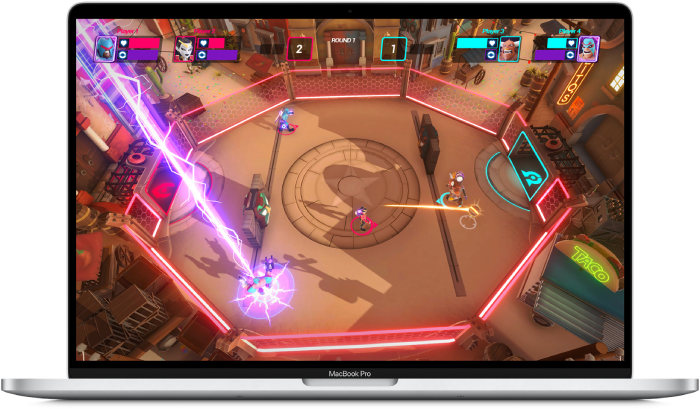 The AMD Radeon Pro 5000M series graphics GPU delivers the greatest graphics horsepower ever in a MacBook Pro. The 16-inch MacBook Pro base model is over two times faster than the previous-generation base model, for seamless playback and faster rendering of ultra-high-definition video.5 And with the optional 8GB of GDDR6 VRAM, you’ll get up to 80 per cent faster performance when executing tasks like colour grading in DaVinci Resolve compared with the AMD Radeon Pro Vega 20.6
Up to
2.1x
faster than AMD Radeon Pro 560X5
Up to
8GB
GDDR6 VRAM
186GB/s
memory bandwidth
Up to
24
compute units
Keyboard
There's magic in
a perfect workspace. 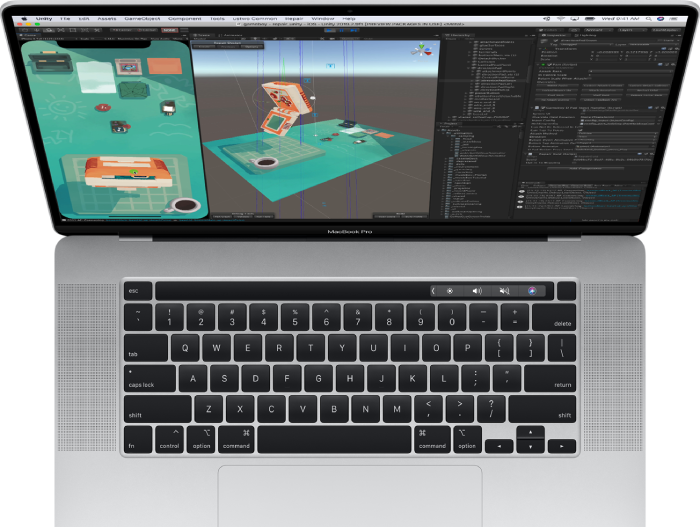 Touch ID. Fast, easy authentication for secure logins and purchases. Force Touch trackpad. Speed your workflow with Force click and Multi-Touch gestures. Touch Bar. The commands you need most are right where you need them - saving time and keystrokes.
Audio
Bigger bass. Better mic.
MacBook Pro has a big voice. The six-speaker sound system produces room-filling wide stereo sound like you’ve never heard from a notebook before. Dual force-cancelling woofers dramatically reduce vibration, extending the lower range of the bass by half an octave. And the studio-quality three-mic array rivals professional third-party microphones for creating super-clean podcasts or music recordings on the go. 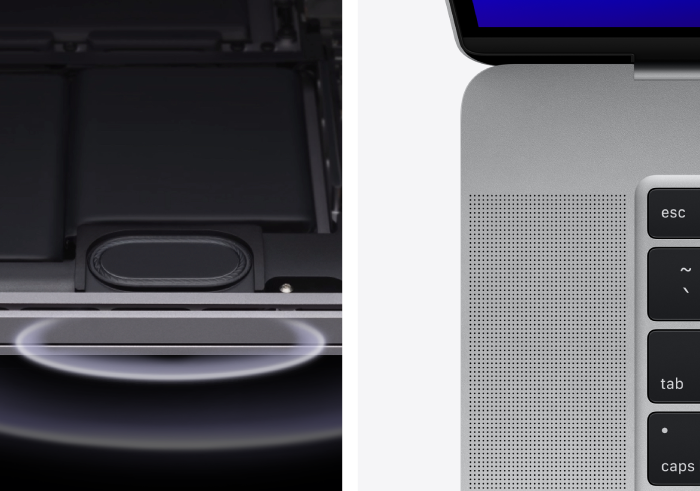 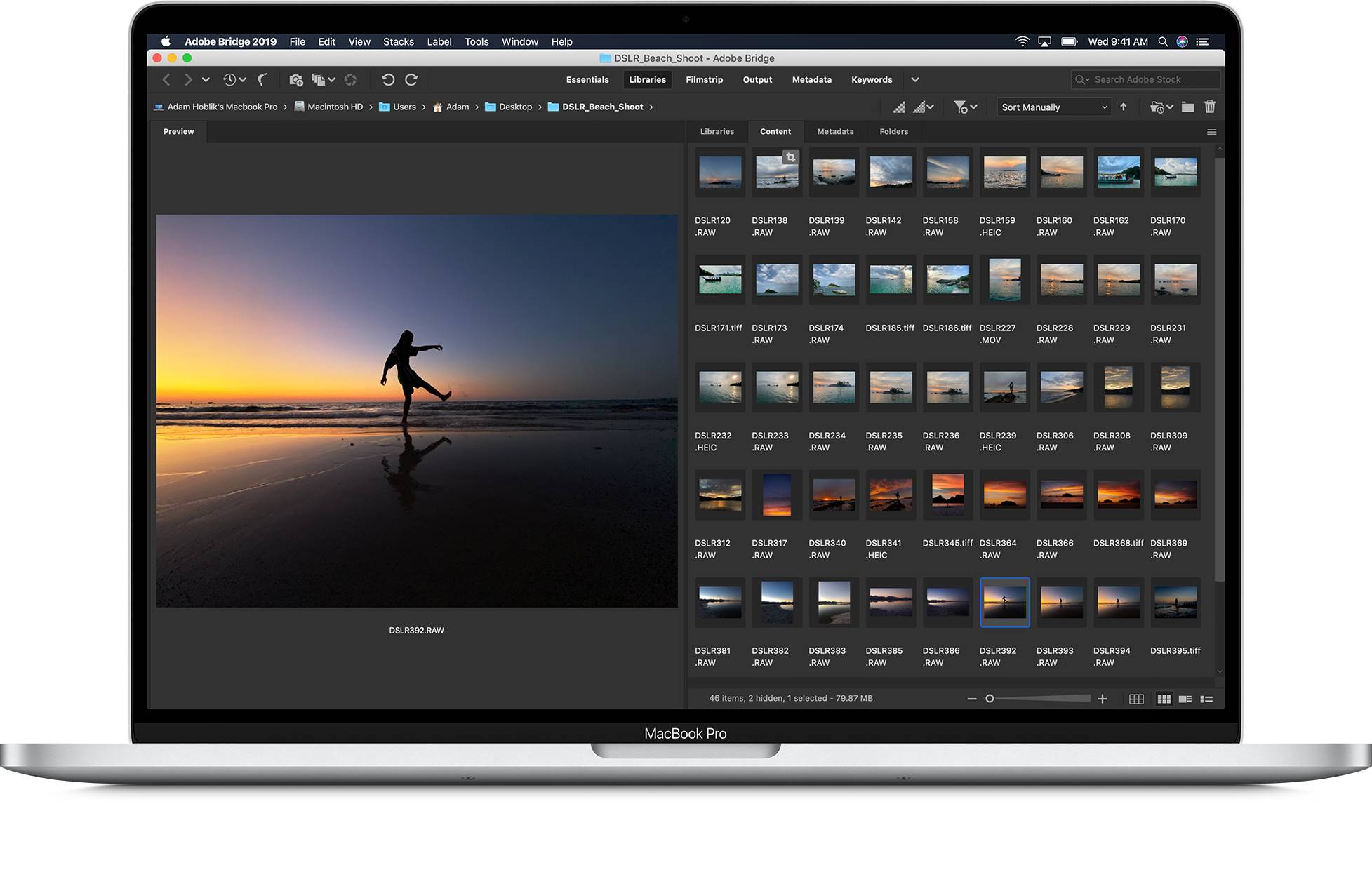 The 16-inch MacBook Pro has up to 8TB of SSD storage — the most available in any notebook. So you can take your entire photo or video libraries with you no matter where you’re headed. And with super-fast speeds, massive files load in an instant and pro apps launch in a blink.
Up to
8TB
SSD storage
Up to
32GB/s
sequential read speed7
Battery
A battery with a strong work ethic. 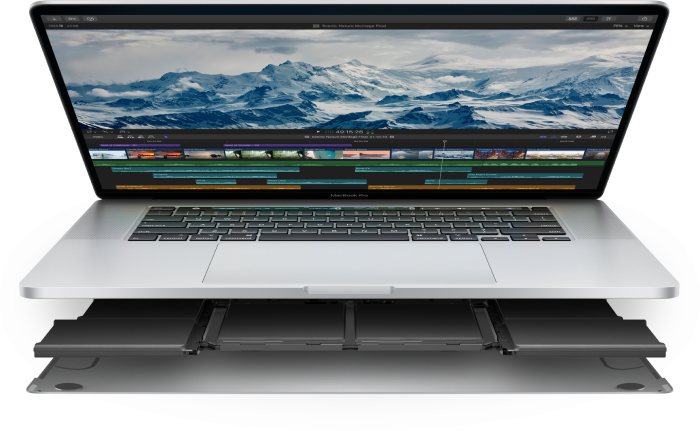 The 16-inch MacBook Pro has the highest-capacity battery Apple has ever put in a notebook. The 100-watt-hour lithium-polymer battery not only powers the larger display and delivers higher maximum sustained power, it also provides longer battery life — up to 11 hours of wireless web browsing and Apple TV app film playback.⁸ So you’ll have more time to work between charges — whether you’re on or off the grid.
100Wh
battery
Up to
11hrs
of battery life
Apple T2 Security Chip
The next generation of security. 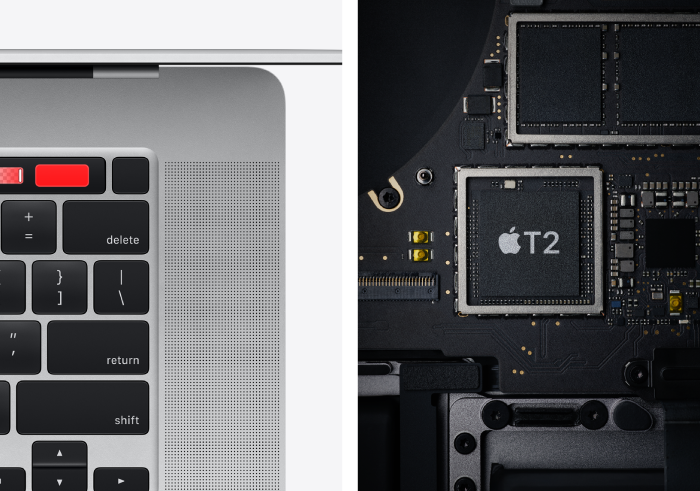 Every MacBook Pro is equipped with the Apple T2 Security Chip — second‑generation custom Mac silicon designed to make everything you do even more secure. It includes a Secure Enclave coprocessor that provides the foundation for secure boot and encrypted storage capabilities. It also consolidates many discrete controllers, including the system management controller, audio controller and SSD controller, into one.
Thunderbolt 3
The most powerful
and versatile port ever.
Thunderbolt 3 combines ultra‑high bandwidth with the ultra‑versatility of the USB‑C industry standard to create one revved‑up universal port. It integrates data transfer, charging and video output in a single connector, delivering up to 40Gb/s of throughput for twice the bandwidth of Thunderbolt 2. MacBook Pro 16-inch is equipped with four ports, so you can do all that from either side. Existing devices are easily connected with a cable or adapter. And Thunderbolt 3 is reversible, so no matter how you plug in, it’s always the right way up.
Up to
40GB/s
data transfer
Supports up to two
6K
displays

Find the right MacBook for you.
Compare
MacBook Pro 16-inch